A few weeks ago Jesse and I moved into our new home which was a little bit exciting! Naturally we were keen to test out our new kitchen so I decided to make pie with a bunch of apples delivered by my very thoughtful mum.

I can now happily report that our oven is in great working order and this apple pie served warm with a scoop of ice-cream was the perfect treat to celebrate our move!

Thanks for reading.
xoxo 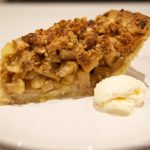