Today I’m sharing my Gluten Free Chocolate Ripple Cheesecake that I made for Valentines Day. I’ve shared a few crazy cheesecake recipes in the past so thought I’d try for a more traditional option and I think I have succeeded.

This cheesecake is sooo good. A delicious and super easy cheesecake thats not too rich and packed with my own Gluten Free version of the Arnott’s Choc Ripple Biscuits. For the Aussies out there, you will know what Arnott’s biscuits are and just how many desserts call for Arnott’s biscuits. So I was stoked when I managed to create a recipe that was quite similar. If you’re not familiar with this type of biscuit, it’s a plain chocolate biscuit that is used as a staple in many desserts.

I originally posted my gluten free version of the Choc Ripple biscuits as part of a dessert from my childhood called peppermint log. I don’t think I really advertised just how similar the biscuits are to the normal gluten containing kind and I’ve never posted the recipe separately. So you might want to print this recipe for safe keeping!

Thanks for stopping by as always, 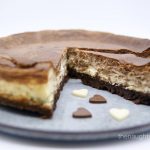