On Monday night, I had the desire to bake this Gluten Free Blueberry Pie. We purchased a bag of frozen blueberries a few weeks ago when they were on special, and what better way to use them than to make pie? I’d never baked or tasted blueberry pie before, so it seemed like the perfect opportunity to do so.

The end result was this heavenly pie, with a beautiful flaky crust and blueberry filling, with a hint of cinnamon to taste. A truly great dessert for a cold wintry night. If blueberries aren’t your thing you might like a few of my other pies such as Key Lime Pie, Pumpkin Pie or Apple Pie with Cinnamon Crumble.

This recipe also marks the occasion of my 100th blog post! I’m super excited to have achieved this, given it’s just a side hobby amongst raising a toddler and working part time. I started out blogging as an escape from my full time job as a Dietitian. Now it’s almost a part time job in itself and I absolutely love it! I love sharing gluten free recipes that everyone can enjoy. I share both my own recipes and recipes from well known authors that I’ve modified to be gluten free. This recipe for example, comes from the Williams-Sonoma Pie & Tart recipe book that I modified to be gluten free and for my own taste preferences.

So, I just wanted to take a moment to say thank you to everyone who’s been following along on my journey thus far. I hope you continue to read my posts and bake my recipes. I get great satisfaction in people enjoying my food. 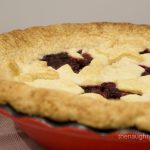