These Gluten Free Melting Moments bring back so many memories from my childhood! Back then I only knew these biscuits as “Yo Yos” thanks to my beloved Nan and Mum. Nan would always get so cross when she went to bake a batch and I had eaten half the raw mixture already from the fridge (oops).

Back in the day, these biscuits were made with a traditional lemon icing and regular flour and feature as part of food stalls at school fetes, a country Sunday market called “Trash & Treasure” and to raise money for various charities/organisations. So I thought it was about time I make a “Gluten Free Yo Yo” and try a variation with Chocolate Buttercream instead. I’ve also included a Lemon Buttercream in case you prefer the more traditional melting moment. Both are YUM. 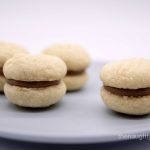