I made these Gluten Free Mini Cinnamon Doughnut Cakes a few weeks ago and I’ve been dying to make another batch ever since! Coincidentally, I happened to bake these on National Doughnut Day. Who knew there was such a day?

I also have to admit I miss normal cinnamon doughnuts. We used to get them fresh and hot from the bakery when I was little.So I now have motivation to try making a batch of gluten free cinnamon doughnuts. If  you have a recipe for them please send it my way?!

A special thanks to the queen website once again for the original recipe. I halved it and modified it to be gluten free.

Thanks for reading, hope you’re all having a great week! 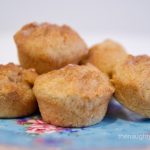