This past weekend I baked these Gluten Free Pecan Blondies and after taste testing (as all good cooks do) I concluded these blondies are simply AMAZING. In fact, I caught my husband stealing two blondies out of the container before they were even photographed. That’s when you know you’re onto a winner!

I also came to the conclusion that blondies don’t get nearly enough attention compared to brownies and really ought to be baked more often. They have a similar texture to a brownie, but the cocoa base is substituted for a vanilla base. Hence the name “Blondie”.

I think thats enough from me today, but if you bake no other slice from my blog, I suggest bake these blondies! 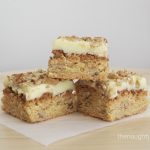