In the spirit of Halloween I decided to make this Gluten Free Pumpkin Pie last weekend!

For those unfamiliar with Pumpkin Pie, it’s a traditional sweet dessert made in the United States and Canada at Halloween, Thanksgiving and Christmas time.

Now one of my favourites, I thought I should share my recipe for Gluten Free Pumpkin Pie with you all. I could seriously eat it all year round!

Thanks for stopping by.
xoxo 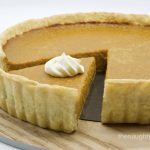