I was in the mood to bake biscuits on the weekend, so continuing on with the nutella theme I decide to make these nutella and chocolate chip biscuits.

The original recipe is courtesy of Sally’s Baking Addiction (a favourite blog of mine) which I then modified to be gluten free and work with the ingredients in my cupboard.

Personally, I prefer peanut butter over nutella, but these biscuits are scrumptious! 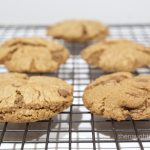