Monday night I was inspired to make these Gluten Free Vanilla Cupcakes with Blackberry Buttercream. We had an abundance of blackberries in the fridge and a few new piping tips I wanted to play with, so it was perfect timing. They turned out perfectly and were an absolute hit with the staff from Lyla’s childcare! I may have eaten one or two myself, but I couldnt resist sending Lyla’s carers a treat, as all the staff have been so great with her since she started.

These cupcakes are so light and fluffy and the blackberry buttercream adds a sweet but slightly tart flavour. Just YUM! The cupcake recipe is a gluten free version from Wedding Cupcakes that I have been meaning to share for a while. I’ve also shared a pretty tasty Peanut Butter Cupcake recipe if you’re looking for a different flavour. 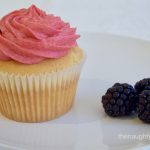 Cupcakes best stored in an air tight container and consumed within 3 days.