To say December has been a ridiculous month is an understatement… but today I’m finally getting the chance to share my recipe for Gluten Free White Chocolate Ginger Snap Biscuits!

As most of you probably know by now, I love ginger flavoured baked treats! So when I had the chance to make something for a friend’s Christmas party, these Ginger Snap Biscuits came to mind! After all, who wouldn’t love biscuits dipped in chocolate? They are super easy to make and absolutely delicious.

I’m hoping to share at least one more recipe with you all before the BIG day, but I won’t make any promises in case any other challenges are thrown at me over the next few days. Amongst the normal chaos of December with Birthdays and several Christmas parties to attend, we’ve had some super fun plumbing issues and multiple days of flooding under our house that no one seems able to fix. Luckily the plumbing issue was quickly rectified and flooding hasn’t caused any damage, phew!

Hopefully everyone else has had a more positive December? I for one am extremely excited for a New Year ahead!! 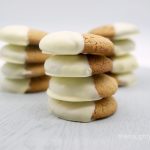